KATMANDU, Nepal –  An avalanche swept down a climbing route on Mount Everest early Friday, killing at least 12 Nepalese guides and leaving four missing in the deadliest disaster on the world’s highest peak.

The Sherpa guides had gone early in the morning to fix ropes for other climbers when the avalanche hit them at about 6:30 a.m., Nepal Tourism Ministry official Krishna Lamsal said from the base camp where he is monitoring rescue efforts.

An injured survivor told his relatives that the path up the mountain was unstable just before the avalanche. As soon as the avalanche hit, rescuers and climbers rushed to help.

Rescue workers pulled out 12 bodies from under mounds of snow and ice and were searching for the four missing guides, Lamsal said. Officials had earlier said three were missing.

The avalanche hit an area nicknamed the “popcorn field” for its bulging chucks of ice and is just below Camp 2, Ang Tshering of the Nepal Mountaineering Association said. Camp 2 sits at an elevation of 6,400 meters (21,000 feet) on the 8,850-meter (29,035-foot) mountain.

Survivor Dawa Tashi was airlifted to Katmandu and was lying in the intensive care unit at Grande Hospital in Katmandu. Doctors said he suffered several broken ribs and would be in the hospital for a few days.

Tashi told his visiting relatives that the Sherpa guides woke up early and were on their way to fix ropes to the higher camps but were delayed because of the unsteady path. Suddenly the avalanche fell on the group and buried many of them, according to Tashi’s sister-in-law Dawa Yanju.

Hundreds of climbers, guides and support crews are at Everest’s base camp preparing to climb to the summit when weather conditions will be at their most favorable early next month. They have been setting up camps at higher altitudes, and guides have been fixing routes and ropes on the slopes above.

The Sherpa people are one of the main ethnic groups in Nepal’s alpine region, and many make their living as climbing guides on Everest and other Himalayan peaks.

More than 4,000 climbers have summited Everest since 1953, when it was first conquered by New Zealander Edmund Hillary and Sherpa Tenzing Norgay. Hundreds have died attempting to reach the peak.

The worst recorded disaster on Everest had been a snowstorm on May 11, 1996, that caused the deaths of eight climbers. Six Nepalese guides were killed in an avalanche in 1970.

Earlier this year, Nepal announced several steps to better manage the heavy flow of climbers and speed up rescue operations. The steps included the dispatch of officials and security personnel to the base camp at 5,300 meters (17,380 feet), where they will stay throughout the spring climbing season that ends in May. 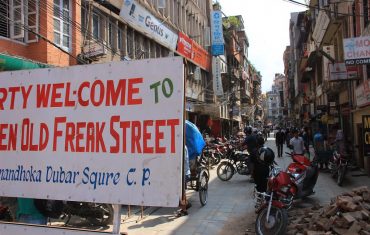