Google launched a virtual tour of Nepal’s Everest region on 15th March 2015. This Everest Region Virtual Tour will provide an opportunity to the armchair tourists of a rare glimpse of life in one of the toughest and most inaccessible places on earth.

Mount Everest also referred to as Sagarmatha in Nepali, meaning “Forehead in the Sky” and Chomolungma in Tibetan languages meaning “Mother of the World” is every trekkers dream but not all dreams come true. Until now, you can get the feel of the Everest Region just by sitting in front of your computer screens all thanks to the team of Google. The Street View project takes viewers into the heart of the Sagarmatha National Park where icy blue rivers run below snow-capped peaks, monks play traditional music and yak-herders navigate precipitous stone-strewn trails.

Armed with two single-lens tripod cameras and a 15-lens custom-built “Trekker” unit designed for backpacks, the Googler’s travelled on foot to capture more than 45,000 panoramic images of the remote villages inhabited by the ethnic Sherpa community in the eastern Himalayas and spend 11 days on the move last March using the tripod cameras and fisheye lenses to shoot inside monasteries, schools and clinics.

Google worked on the project with Kathmandu-based start-up Story Cycle of 55 years old Nepali mountaineer Apa Sherpa, who scaled Mount Everest a record 21 times before he retired from climbing and set up an educational charity.

Nepal’s Sherpa community, who have long labored as guides and porters on mountaineering expeditions, hope the project will promote the region and raise funds to improve access to education.

Visitors to the Google Street View website can scroll through a slideshow of 360-degree views created by digitally stitching together thousands of 75-megapixel photographs, or click on the online map to see images of individual sites.

Google held a digital mapping session in the Himalayan town of Namche. These online maps are a good source of information for visitors who are willing to visit this region, it will create more opportunities, better opportunities than working on the mountain.

Everest Region Trek is one of the most adventurous, toughest and one of the best treks. Osho World Adventure offers various trekking packages in Nepal, Bhutan, Tibet and India including trekking in Everest region, Manaslu region, Annapurna region, Langtang region trek and many other treks suitable for all types of trekkers from beginners to the expert. Contact us for your adventure trek. You can also design your own itinerary and we can can make all the arrangements for you according to your budget plan. 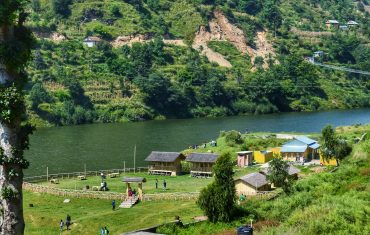