Have you heard of Nepal, a masterpiece created by Mother Nature? I hope a few of us might have heard about it. In case you don’t know, here are a few interesting facts about Nepal.

Geography:                 Landlocked country sharing a border with India on the East, West and South and China on the North. The larger part of the country lies on the southern slopes of the Himalayas and extends down to the hills and then to the plains known as the Terai region.

Everything you need to know; Interesting facts on Nepal

Nepal is not the only country without a rectangular flag but also Nepal’s flag is the most mathematical flag. The crimson red flag with a blue border has the moon and sun printed on it. The blue border is the National Flag of Nepal symbolizes peace, the crimson red is Nepal’s national color, and it indicates the bravery and victory. The two triangles symbolize the Himalaya Mountains. The moon represents the serenity of the Nepalese people and the shade and cool weather in the Himalayas. The sun stands for the fierce tenacity of the Nepalese people and the heat of the lower parts of Nepal. Among many interesting facts on Nepal, it is the foremost one.

In Nepal kumari, or “living goddesses,” are pre-pubescent girls considered to be the earthly manifestations of divine female energy, incarnations of the goddess known as Taleju, the Nepalese name for Durga.

Selected as children, they live in temples, are carried in chariots during festivals and are worshipped by thousands of Hindus and Buddhists. They retire upon puberty. Kumari literally means “Virgin” in Nepali.

Light of Asia the founder of Buddism Religion, Buddha was born in Lumbini, Nepal. He was the prince of Kaplivastu, son of King Sudhodan and Queen Maya Devi and was given the name Siddhartha Gautam before he achieved Nirvana and became Buddha.

Nepal is the home to the world’s highest peak, Mount. Everest. It is known as Sagarmatha in Nepali which means “Forehead to the Sky” in Tibetan languages Everest is known as Chomolungma meaning the “Goddess Mother of Snows”.

Jump from the remarkable steel, suspension bridge located above the Bhote Kosi River near the Nepal / Tibet border. Built specifically for bungee, jumpers get a view of the Himalayas as they drop 500 feet (160 meters) in the air. This jump is known to be one of the longest free-falls in the world. The base is located approximately three hours drive from Kathmandu

This zip line located at Sarangkot, about 10 km from the beautiful town of Pokhara, Nepal with a vertical drop of 600 meters over a total distance of 1.8km makes this the world’s steepest, tallest and one of the longest zip lines. It’s also one of the fastest with top speeds of up to 140 kmph.

Weed is said to be illegal and is not available for buy and sell, we can find the growth of weeds everywhere mostly in the rural area, around the roads, ditches, farmlands, mountainside and everywhere. Who would not love to fire a pot and get along with the fine environment that Nepal beholds? During the festival of “Shiva Ratri,” you will find people smoking weed especially in the famous shiva temple “Pashupatinath”. It is believed that Hindu God Shiva use to smoke Weed. Hence people consume weed in the form of Prasad, Scared food taken after offering to Gods and Goddess in Hindu Religion. Indeed, this is a bit odd as well as an interesting fact about Nepal.

Nepal is truly a Himalayan country. At present, there are 326 peaks opened for mountaineering expeditions in Nepal including 13 peaks above 8000m (some of the 13 peaks are part of the same massif as their main peak). So, there are surely more than enough in Nepal for any mountain enthusiastic from around the world and it’s clear why Nepal is known as the Himalayan Kingdom.

Tilicho lake (4,919 m) is the highest lake in the world. The Annapurna range of the Himalayas in the Manang district of  Nepal. Tilicho Lake is the destination of one of the most popular side hikes of the Annapurna Circuit trek. The hike takes additional 3-4 days. No camping is required, as new lodges have been built between Manang and the lake. The final approach to the lake is done in a day hike from the lodge at Tilicho Base Camp. Yes! There are many interesting facts on Nepal like this high altitude lake.

The Kali Gandaki Gorge is the Gorge of the Kali Gandaki (or Gandaki River) in the Himalayas in Nepal. By some measures the Kali Gandaki gorge is the deepest gorge in the world, being 5,571 m or 18,278 ft lower than Annapurna I which bounds it at one point. Gorge depth is difficult to define due to disagreement over rim height so this claim is disputed.

Arun Valley is really a non-touristic area but we can see significant views of Mt. Everest, Makalu, and hundreds of other mountains just on your eye. It is the highest valley in the world located at a height of

The Terai-Duar Savanna and Grasslands [IM0701] eco-region sit at the base of the Himalayas, the world’s youngest and tallest mountain range. About 25 km wide, this narrow lowland ecoregion is a continuation of the Gangetic Plain. The ecoregion stretches from southern Nepal’s Terai, Bhabar, and Dun Valleys eastward to Banke and covers the Dang and Deokhuri Valleys along the Rapti River.

Nepal does not have an independent day because Nepal was never colonized. Nepal is proud of this fact that Nepal has never been ruled by any other country. Nepal is also the oldest country in South Asia.

“Better to die than being a coward” is the motto of the Nepalese Gurkha soldiers who are an integral part of the British Army since 1815 when a peace agreement was clinched by the British East India Company after it suffered heavy casualties during an invasion of Nepal.

Something for the world to learn from the people of Nepal who hold the best feeling for Unity. There are 9 different religions residing in this country and yet there hasn’t been a single case where there has been a clash in the name of religion in Nepal.

Nepal Standard Time (NST) is the time zone for Nepal with a time offset from Coordinated Universal Time of +5:45.

After reading interesting facts on Nepal, up to here, now I am sure you can speak many more words about Nepal. For more interesting informations, blogs and articles you can follow Trekking Top Nepal. Simply, buzz us when you plan your visit to Nepal. 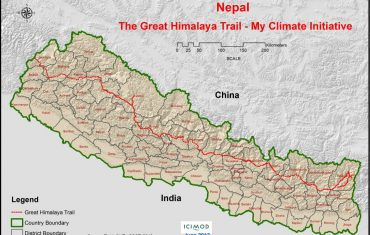 Great Himalaya Trail | Master of all networks of Nepal | GHT