Mt. Everest (8,848 m) is the world’s highest mountain which is situated at the Mahalangur part of Himalayas in Nepal. Mt. Everest can be climbed from two sides one is from southeast part which is from Nepal and another from North point which is from Tibet. The Southeast part is popular expedition route which was used by the Edmund Hillary and Tenzing Norgay in 1953 and the first recognized of fifteen routes to the top by 1996.

Mount Everest climbing via North Face is very much remarkable than the south part (Nepal) side. Climbing up to a steep 13,000 m. from the Rongbuk Glacier, it overlook above the Tibetan Plateau. This side of the mountain was first climbed by the British Expedition in the 1920’s and 30’s came, when Nepal was closed to foreigners. Everest climb via North was first summit by the Chinese in 1960.

In the last few years it has received the attention of several commercial expeditions, and with careful planning the same success rates as the south sides are possible. Gaining 8000m is demanding but it is the last 848m that are the most difficult. In recent years, the North Ridge has become more easily reached for those trekkers who are able to manage with the physical demands necessary by the route.

Osho World Adventure will organize Everest Expedition during the pre and post monsoon period.  Late May offers the greatest chances of reaching the summit, after acclimatizing in April and the early part of May, a good rest at base camp the warm summer winds, as they have in the past, will often allow those on the summit to shoot photographs without wearing gloves. Only with good preparation and back-up is possible. 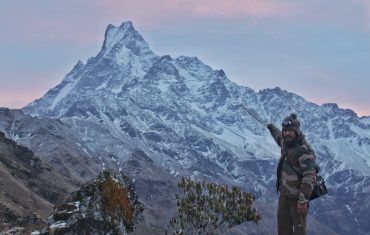